National healthcare policy has been a frightening rollercoaster lately. Unfortunately, it's not over yet.

For months we’ve seen Congress introduce ACA reform bills that would take healthcare from hundreds of thousands in Arizona, cause tens of thousands to lose their jobs and threaten our state’s entire healthcare system.

The latest proposal introduced by Senators Graham and Cassidy appears to be losing momentum, due in part to opposition by Senator John McCain, who has criticized the lack of transparency in the process. In Arizona, Graham-Cassidy is expected to reduce healthcare funding by $1.7 billion in 2020, eliminate Medicaid expansion for low-income adults, make insurance more expensive and remove protections requiring coverage for pre-existing conditions.

Unfortunately, and inexplicably, Governor Ducey expressed strong support for the bill, even before the impact to Arizona's healthcare system and economy was known. According to the Center on Budget and Policy Priorities, “beginning in 2027, Cassidy-Graham would be virtually identical to a repeal-without-replace bill" due to the phase out of all federal Medicaid funding. 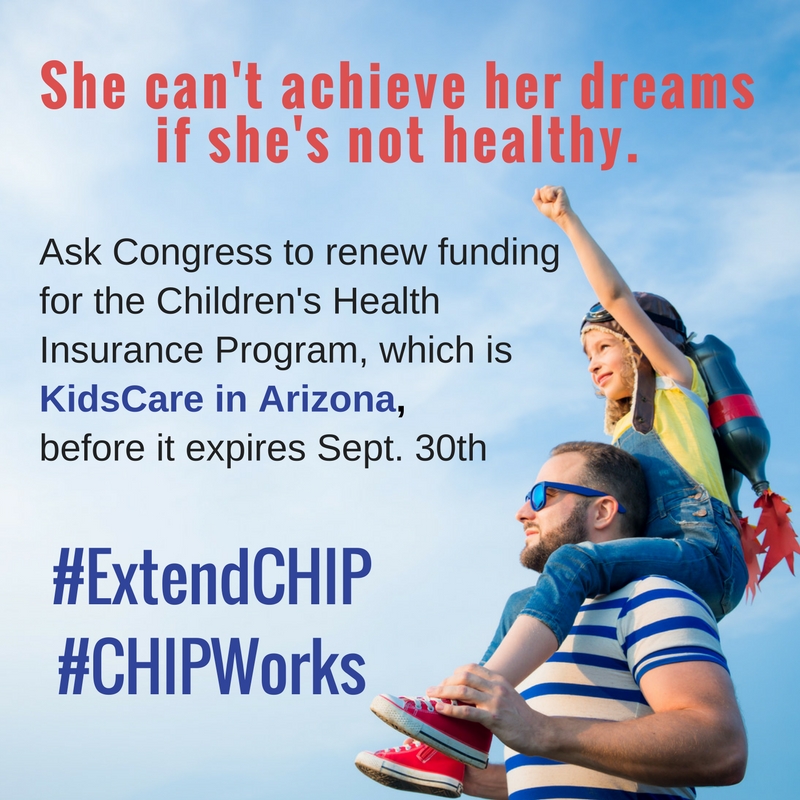 Funding for the federal Children’s Health Insurance Program (CHIP), called “KidsCare” in Arizona, must be reauthorized by Congress before it expires on September 30. KidsCare offers health coverage for children of low-income families who are working and earning too much to qualify for Medicaid coverage, but whose income is too low to afford insurance through marketplace exchanges. KidsCare is a proven, cost-effective program that incentivizes parents to work, while allowing their children access to healthcare during their critical childhood years.

If the program is reauthorized, but with reduced funding, KidsCare still faces grave threats. During the 2018 budget process, there was a last-minute provision added that will freeze enrollment in our KidsCare program if federal funding levels drop. Families who earn enough will move out of the program, and no new families will be able to sign up. Arizona has been down this misguided path before; beginning in 2009, enrollment was frozen for five years, and Arizona became the third worst state for uninsured children in the nation.

Along with a bipartisan coalition of State Representatives, I am urging our congressional delegation to reauthorize funding at current levels. Without reauthorization, federal funding for KidsCare will end, and over 23,000 Arizona children will lose their healthcare.


We need this rollercoaster to end. I will continue to work for reforms that protect healthcare while improving access and affordability of care.
Please join me at my next Coffee and Conversation, Saturday, October 7 from 9:30-11am at the Mesquite Library, 4525 Paradise Village Pkwy N, Phoenix, AZ 85032. Christine Marsh, State Senate candidate and 2016 Arizona Teacher of the Year will be my guest. Click here to RSVP.